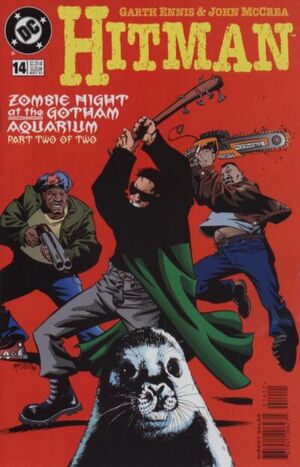 I got bit! It'll infect me, like in all the movies! I'm gonna die and come back as a freakin' zombie!

Appearing in "Zombie Night at the Gotham Aquarium, Part 2"Edit

Synopsis for "Zombie Night at the Gotham Aquarium, Part 2"Edit

While Ringo Chen, Hacken, Natt the Hat and Tommy Monaghan are holding off the zombies, Hacken gets bit. Afraid he might turn into a zombie, he cuts off the hand that was bitten. The four make a mad dash -- guns blazing -- for the dolphin show theater, where they are attacked by a dolphin and fish. Doctor Minett gets the drop on the group, but is killed by a zombie shark.

Back at Noonan's, Natt and Tommy decide to send the money they earned on the job to Greenpeace.

Retrieved from "https://heykidscomics.fandom.com/wiki/Hitman_Vol_1_14?oldid=1433994"
Community content is available under CC-BY-SA unless otherwise noted.