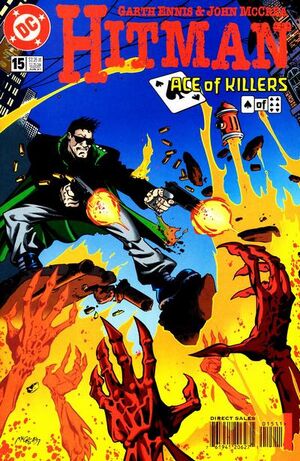 If there's a worse place to get caught in a gunfight with a demon from hell, I'd love to see it.

Catwoman steals a rifle from a museum.

At the pier, Tommy Monaghan and Natt the Hat are getting some guns when they are attacked by Mawzir, a gun wielding demon.

Just before getting in a car and escaping, Tommy reads Mawzir's mind.

The two hitmen return to Noonan's Bar and Tommy tries to convince Natt to stay away from him until he sorts this thing out with Mawzir. In the bathroom, they catch one of Mawzir's goons reporting in on a cell phone. They capture and interrogate him to find out that Mawzir took over one of the crime families in the city. They leave the goon in the bathroom and Detective Deborah Tiegel shows up and tells Tommy that she was fired from the police force.

Tommy and Deborah go back to her apartment where she gets very drunk. Tommy puts her to bed and leaves.

Tommy meets up with Natt and shows him a something in a sack. He then tells Natt that when he read Mawzir's mind earlier he saw Catwoman in the demon's mind. He tells Natt they are about to invent the cat-signal. They go on the roof of a hotel and put the dead cat from the sack onto a searchlight and shine it on the sky in an attempt to call Catwoman.

Retrieved from "https://heykidscomics.fandom.com/wiki/Hitman_Vol_1_15?oldid=1433995"
Community content is available under CC-BY-SA unless otherwise noted.