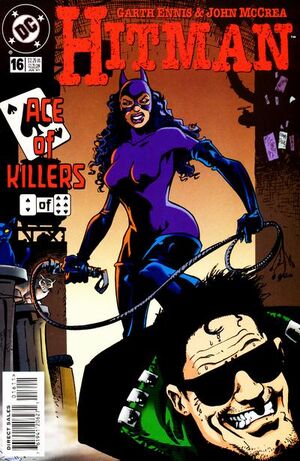 Boy, it's at times like these you really wish you had x-ray vision like they do in comic books, huh?

Catwoman shows up on the roof and meets with Tommy Monaghan and Natt the Hat. They talk about Mawzir and discover that Catwoman did a burglary for someone recently, stealing the Ace of Winchesters from the Museum of Antiquities. What they don't understand is why a demon would need another gun.

So they arrange to set up a meet with Jason Blood to try and learn more.

When he arrives from the airport, Natt and Tommy kidnap Jason and take him back to Noonan's where they talk with Catwoman about the Winchester. Jason tells them the Winchester is a gun that can kill demons. Just as they are about to leave the bar, Deborah Tiegel shows up. She is followed closely by gunfire. The Mawzir has arrived, guns blazing.

Tommy and Tiegel hop in a car, with Natt at the wheel and the drive off, Mawzir and his goons in pursuit. They stop the car near a church, get weapons out of the trunk and run into the church for shelter. A lengthy gunfight ensues.

Retrieved from "https://heykidscomics.fandom.com/wiki/Hitman_Vol_1_16?oldid=1433996"
Community content is available under CC-BY-SA unless otherwise noted.