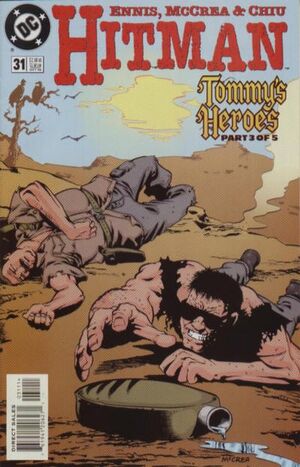 Wise up, will you? I've been holdin' me guts in for the last twenty minutes. This is as far as I go.

Tommy Monaghan and Bob Mitchell hike through the desert with Sergeants Karkov, Walls and Grover tracking them.

Back at the army base, Mr. Martindale walks into his office, where Ringo Chen, Natt the Hat and Hacken are waiting for him. They have checked his files while he was out of the office and found that he is a consultant for Walker Firearms Inc., the company that sold the Tynandan army its weapons. They threaten Martindale with death and he admits to them that Tommy is still alive somewhere in the desert.

A soldier walks into the office and Nat shoots him. Martindale dives out the window and escapes. Ringo, Nat and Hacken swipe a jeep and go look for Tommy.

Bob is wounded from his knife fight with Karkov and Tommy supports him as they continue their trek through the desert. They walk for twenty minutes and then Bob tells Tommy he can go no further. He is going to die. Tommy confesses to Bob that Eddie Baker is dead because of Tommy. Bob forgives him, the two clasp hands and Bob dies.

Tommy buries Bob and continues moving through the desert. Ringo, Nat and Hacken find him and fill in Tommy on Martindale's connection to the weapons company supplying the soldiers.

Retrieved from "https://heykidscomics.fandom.com/wiki/Hitman_Vol_1_31?oldid=1434011"
Community content is available under CC-BY-SA unless otherwise noted.