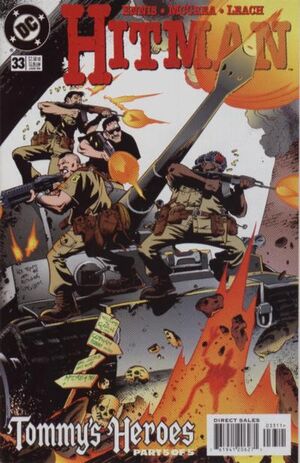 Glad to hear it Mr. Ributu. 'Cause we can always come back.

Ringo Chen, Natt the Hat and Hacken go inside the Tiger tank and Tommy Monaghan mans the gun turret atop it. They drive toward Gamin City, and once there, blow away anything that looks remotely military.

From his palace, president Kijaro sees the smoke from the attack and tells his superpowered bodyguards, Skull and Scarlet Rose to prepare to earn their pay.

The tank arrives at Kijaro Palace and the first person they encounter is Scarlet Rose, who has power over plant life. She causes ivy to grow under the tank, jamming its treads. Nat switches to low gear and the tank bursts free of the vines, running over Scarlet Rose.

Skull picks up part of a building and hurls it like a missile at the tank. The tank gets stuck but fires an armor piercing shell at Skull, killing him. Then the tank fires a shell at president Kijaro.

When Ributu arrives, Tommy tells him if he becomes a cruel dictator like Kijaro, Tommy and friends can always come back and set things aright.

Retrieved from "https://heykidscomics.fandom.com/wiki/Hitman_Vol_1_33?oldid=1434014"
Community content is available under CC-BY-SA unless otherwise noted.