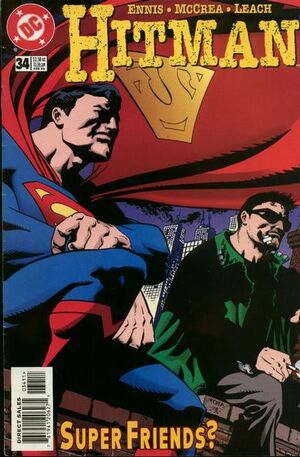 Lemme tell you the problem with America, okay? This could be the greatest place on Earth. It really could. You got all these different people comin' here to get away from oppression an' poverty. All lookin' for a better life. But what do they do? They hang on to all the things that got 'em into trouble in the first place. They wanna go on fightin' the same wars an' hatin' the same people they did in the old world. They all wanna be Italian or Greek, or Irish or Polish or Russian, or African or Vietnamese or Cambodian of whatever... so they hang onto alla that. They stick to their own kind, an' everyone stays suspicious of everyone else an' for what...? Culture? History? What the hell is that, a bunch of stuff your folks said you hadda believe in all your life? Does that make it real? But you, man. You showed 'em how it's done. You're the classic immigrant guy who comes to the States an' joins the meltin' pot. It's like you're sayin' -- okay, I'm from planet Krypton or wherever, but that's all in the past. I'm startin' over. I'm American. What can I do to help?

Appearing in "Of Thee I Sing"Edit

Synopsis for "Of Thee I Sing"Edit

Tommy Monaghan is sitting atop a roof, reading a magazine about Superman, when Superman lands on the rooftop. Tommy stares, open mouthed. Superman apologizes for intruding and introduces himself. Superman tells Tommy that something went wrong for him tonight, that he failed.

When the nuclear space shuttle Yeager's engines overheated in space, Superman was on monitor duty when the S.O.S. went out. Superman saved the surviving astronauts. All but one, who was stuckin the subflooring while the rest of the crew escaped. Before Superman could do anything about it, the shuttle blew up. Superman came to Gotham to talk to Batman about things, but Batman said something typically cryptic and brushed off Superman for some work.

Tommy comforts Superman, reminding him what a hero he is. Feeling better, Superman apologizes for taking up so much of Tommy's time, autographs Tommy's magazine and flies away.

Whistling, Tommy pulls out his sniper rifle and shoots Figs Kernahan, in his apartment across the street.

Retrieved from "https://heykidscomics.fandom.com/wiki/Hitman_Vol_1_34?oldid=1502442"
Community content is available under CC-BY-SA unless otherwise noted.