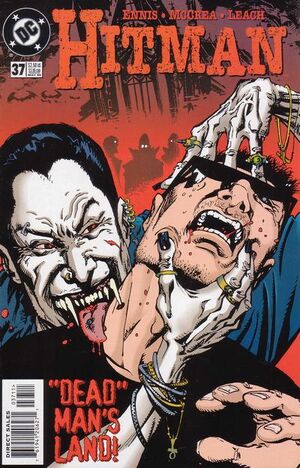 We got a problem here that's almost as big as your ass.

After an earthquake, much of Gotham City has been evacuated. Vampires are taking over the city.

Natt the Hat drops by Tommy Monaghan's place to see how he is doing. Tommy tells Nat about his recent family revelation and how he killed his father. Tommy and Nat go to Noonan's Bar. Tommy goes out back of the bar with Nat, Hacken and Ringo Chen for target practice.

Sean Noonan introduces the boys to Maggie Lorenzo. Maggie's son Michael has gone missing and Nat and Tommy agree to find him.

The two see a child on a playground and go to see if its Michael and are confronted by a vampire. Tommy uses a shotgun to blow off the vampire's legs and arms. They leave the vampire in the park to die when the sun rises. Tommy and Nat decide to go vampire hunting and are almost run down by a car with tinted windows. They take shelter in a church. One of the vampires is waiting inside for them.

Retrieved from "https://heykidscomics.fandom.com/wiki/Hitman_Vol_1_37?oldid=1434018"
Community content is available under CC-BY-SA unless otherwise noted.