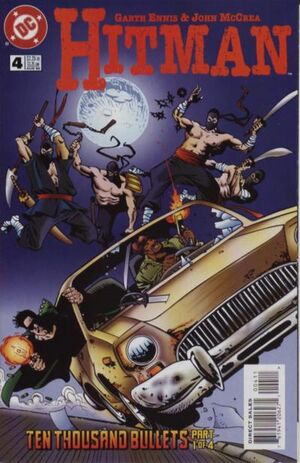 What you s'posed to be, some kinda Irish Terminator?

Tommy Monaghan awakens to Crazy Dick Dunston standing over his bed with a shotgun. Dunston claims that Moe Dubelz has hired him to kill Tommy. Tommy baits Dunston into admitting that he is working alone, then kills him with a hidden pistol and goes back to sleep. At the Dubelz mansion, Joe Dubelz is rotting away, still attached to his conjoined twin, Moe. Moe complains that no one has been able to kill Tommy Monaghan in retaliation for the deaths of his father and brother. Just then, Johnny Navarone enters the room and proves his prowess by killing two of Moe's guards. He is hired on the spot. Navarone explains to Moe Dubelz that he has researched Tommy Monaghan, that Monaghan is being monitored by the government after the events of the Bloodlines.

At Pat Noonan's apartment, Tommy and Pat talk about moving out of Gotham City and into Manhattan. Pat mentions that Nicky Lincoln wants to hire Tommy to do a job for him. It turns out that Tommy is to kill a metahuman who beats up drug dealers then turns around and sells the drugs he takes from them. He promises to think about it. Later, Wendy tells Tommy that she's in love with him. Tommy is ambivalent, knowing that Wendy would think differently of him if she knew what he did for a living.

Tommy's friend, Natt the Hat is in Gotham for his mother's funeral. As the two reminisce, they are attacked by ninjas, but Tommy sees them coming with his x-ray vision, and they are able to fight them off. Tommy is able to coerce one of the ninjas into revealing who sent them: Moe Dubelz.

See the Bloodlines article for more information on the events Johnny Navarone mentions in this issue.

Retrieved from "https://heykidscomics.fandom.com/wiki/Hitman_Vol_1_4?oldid=1433984"
Community content is available under CC-BY-SA unless otherwise noted.