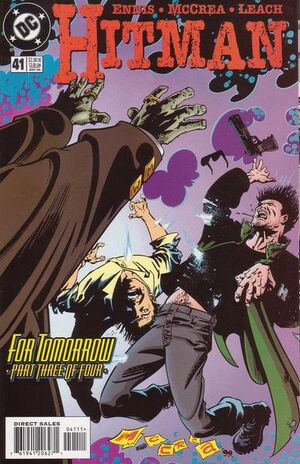 So you live for tomorrow, hoping there'll be something better. Something more than death.

Appearing in "For Tomorrow: Part Three of Four"Edit

Synopsis for "For Tomorrow: Part Three of Four"Edit

The Waterman begins torturing Ringo Chen and Tommy Monaghan and then tosses them into a cell. Ringo tells Tommy how he was born in China and became a soldier to try and help his parents, since soldiers have a certain amount of power in China. He was a gunner at Tiananmen Square who walked away from his duty when ordered to fire on his own people. He was shot and put in solitary confinement. His parents were killed as torture for him. Ringo escaped from confinement in China.

The Waterman's men come and take Tommy and Ringo for more torture. Ringo loses an eye and three ribs.

When he awakens in the cell with Tommy, he continues telling his origin story. He tells Tommy how he came to Gotham City and took a job killing people for his uncle, even doing some work for the CIA later. After his uncle died, he began working freelance.

Tommy tells Ringo there are two men coming to get them and that this might be their chance at escape. Together they kill the two men, taking their weapons and decide to kill the Waterman and his thirty or so goons.

The title of this story arc comes from the Hong Kong film For a Better Tomorrow, starring Chow Yun Fat, who the character of Ringo Chen was modeled after.

Retrieved from "https://heykidscomics.fandom.com/wiki/Hitman_Vol_1_41?oldid=1434022"
Community content is available under CC-BY-SA unless otherwise noted.