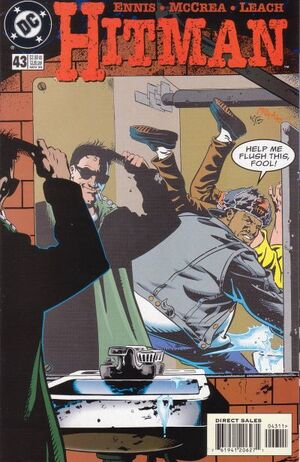 Monaghan...say Ringo was the best, okay? Need to hear you admit it...say it...

Appearing in "The Morning After, The Night Before"Edit

Synopsis for "The Morning After, The Night Before"Edit

Tommy Monaghan wakes up next to Wendy and realizes that when he went to tell her that Ringo Chen was dead, he wound up sleeping with her. He starts to sneak out of her apartment and the floorboards creak, waking her up and she calls him a creep.

Tommy goes to Noonan's bar and talks with Sean Noonan about his mother.

Next, Tommy goes to the zoo to see Deborah Tiegel and she sees a hickey on his neck. She tells him if he comes near her again, she'll kill him.

Tommy goes to Natt the Hat's and Natt tells Tommy about a job he has lined up for them. The two go to a bar, find their target and kill him in the bathroom by drowning him in the toilet. On the way home from the job, Tommy gets a call from Tiegel. She tells him she wants to meet him at the zoo.

Tommy goes to see Tiegel, who is dressed in nothing but an open shirt and some lingerie. She beckons him forth into a dark room. He goes in and she tells him to take all his clothes off. Once he does she turns on the light and leaves him locked in a room with a lion.

Retrieved from "https://heykidscomics.fandom.com/wiki/Hitman_Vol_1_43?oldid=1434024"
Community content is available under CC-BY-SA unless otherwise noted.