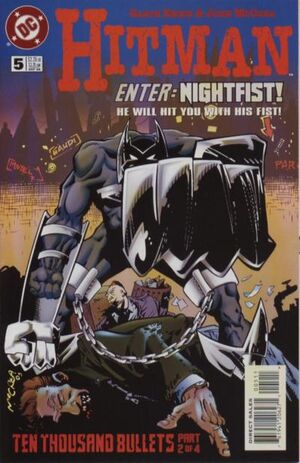 Prepare yourselves for justice at the hands of Nightfist!

The story opens with Nightfist breaking up a drug deal and savagely beating those involved. Unbeknown to him, one of the dealers was an undercover Gotham City Police Officer. The officer puts a tracer on Nightfist before passing out. After dispensing with the violence, Nightfist picks up the cocaine the dealers were carrying and walks off. Meanwhile, Tommy Monaghan and Natt the Hat are discussing the hit on Nightfist ordered by Nicky Lincoln. Tommy phones Nicky and agrees to take the hit. Nicky then makes a call to Johnny Navarone and tells him that Tommy has taken the bait.

Tommy and Natt visit Noonan's Bar, where they meet up with Hacken, Ringo Chen, and Sean and Pat Noonan. They play pool and Tommy introduces everyone to Natt, recounting a story of there time in Iraq during the first Persian Gulf War. Natt and Tommy's marines unit had been dropped 100 miles from the combat zone and had to make camp in the desert. Seeing a group of soldiers while on guard, the two open fire on them, believing them to be Iraqi Elite Republican Guardsmen. Instead, they turn out to be a British S.A.S. patrol. After the story, Pat ribs Hacken about his prowess at billiards and Hacken strikes him, calling him a wimp who hides behind his friends and family.

Later, Tommy and Natt stage a mugging so that Nightfist will attack. It's successful. Nightfist shows up, and Tommy and Natt blast him with a round of bullets. Unfortunately, Johnny Navarone has been tracking Nightfist, and he drops a grenade into the alley where Tommy, Natt, and Nightfist were fighting. Tommy sees the grenade and is able to knock Natt out of the way before it goes off. As the two lay stunned, Johnny Navarone steps into the alley and fires his gun at Tommy.

Retrieved from "https://heykidscomics.fandom.com/wiki/Hitman_Vol_1_5?oldid=1433985"
Community content is available under CC-BY-SA unless otherwise noted.