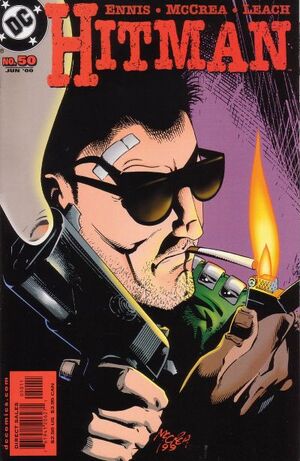 Appearing in "The Old Dog Epilogue"Edit

Synopsis for "The Old Dog Epilogue"Edit

Fifty years into the future, several fans of the Hitman pulp novels visit Noonan's Bar. They marvel at the bar and pictures of the old gang. As the fans retell all the great adventures from the books, an old man interrupts them and claims all the tales are either exaggerated or flat-out wrong.

Sure, some of it was true, he explains. The guys were killers and they did murder many mobsters, including the woman responsible for Sean Noonan's death, Isabella Feretti. But Tommy and the crew weren't legends, they were guys from the same neighborhood, in the same profession who hung out together. The only thing that made them special at all was that they were wrapped up in something so deep, when it was their time, they stared into death without blinking.

As the man finishes his story the group ask to know more about Tommy and his friends but the man is done talking. They ask his name. As the old man exits the bar, he quietly answers, "Hacken."

Retrieved from "https://heykidscomics.fandom.com/wiki/Hitman_Vol_1_50?oldid=1434031"
Community content is available under CC-BY-SA unless otherwise noted.