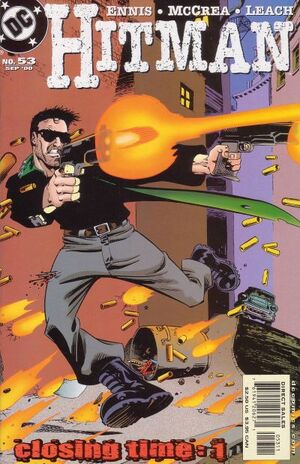 Central...Intelligence...Agency. Could that be the C.I.A.?

Men in suits with gun chase after Maggie Lorenzo. She hops in a cab and runs to Tommy Monaghan. Tommy attends the funeral of Deborah Tiegel's grandfather. While he goes off on his own, Tiegel's sister Susan suggests to Tiegel that if she turns Tommy in to the police, they might give her job back to her.

Back at Noonan's Bar, Maggie tells Tommy what happened to cause those men with guns to chase her. She was on her way to work at Donegan's Cafe. Donegan opened the cafe to find a human crouched on the counter, eating something. It leaped at Donegan and killed him. Men with guns showed up and killed the person. When they saw that Maggie had witnessed the whole thing, they began chasing her.

Just then, the men with guns show up in the bar and state that Maggie is coming with them. Tommy and Nat take out the men. Tommy picks up a cell phone from one of the bodies and dials the last called number and reaches Agent Truman. Tommy tells Truman to get his men out of the Cauldron and threatens Truman with death if he comes anywhere near Maggie.

Truman contacts someone in Miami about killing Tommy.

Retrieved from "https://heykidscomics.fandom.com/wiki/Hitman_Vol_1_53?oldid=1434034"
Community content is available under CC-BY-SA unless otherwise noted.