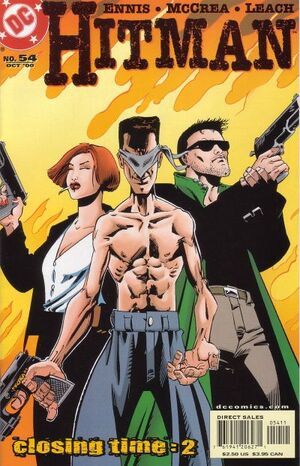 Tell Jabba even I get boarded occasionally.

CIA agent Kathryn McAllister arrives at Noonan's Bar to talk to Tommy Monaghan. She tells Tommy that she has quit the agency because she draws the line at killing innocent people like Maggie Lorenzo.

At a secret location, a man fires a gun at a target range, blindfolded. He hits the target every time. Truman arrives and tells the man, Marc, that he has a job for him.

Back at Noonan's, Kathryn tells Tommy, Natt the Hat and Maggie that Truman has started trying to make his own superheroes. The man Maggie witnessed kill Donegan was one of them. She tells them that Truman is hidden away in a secret location in Gotham, surrounded by men with guns, performing experiments in an attempt to create superheroes he can use as an army.

Tommy and Kathryn go to lunch and while they are talking, CIA agent Bold arrives to take Tommy back to Truman. Tommy shoots him from under the table. A cell phone on agent Bold rings and Tommy answers it. Truman tells Tommy there is a videotape in Bold's pocket and that they won't speak again.

Tommy and Kathryn go back to his apartment and watch the tape. It is of Marc firing blindfolded at a target range. On the tape, Truman asks Marc to state his father's name. Marc says the name Johnny Navarone.

Kathryn grabs Tommy and dives out the window as the tape explodes. As they fall, Tommy lands on a fire escape and grabs Kathryn's arm, pulling her up onto the escape where they begin to make love.

There are two Star Wars references in this part of the tale. First the bar scene where Han Solo shoots Greedo is referenced when Tommy shoots Agent Bold under the table. Second, thermite is used in the explosive videotape, just as a thermite grenade was used in Return of the Jedi.

Retrieved from "https://heykidscomics.fandom.com/wiki/Hitman_Vol_1_54?oldid=1434035"
Community content is available under CC-BY-SA unless otherwise noted.