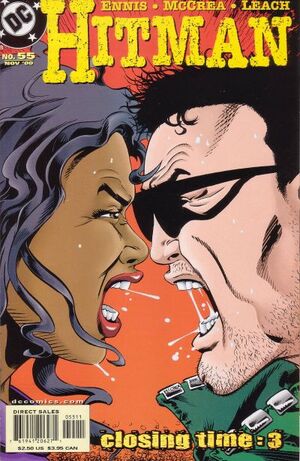 Stevie Kelly tries to kill Tommy Monaghan, but Tommy kills him instead.

Tommy goes to see Deborah Tiegel. She lets him into her apartment. Tommy tries to break up with Tiegel and gives her $100,000 to get her set up in New York. They get into an argument about the money and Tommy ends up leaving the money on a table and departing.

Tommy goes back to Kathryn's apartment. They talk for a while and make love.

Later, at Noonan's Bar, Kathryn tells the others she has contacted some people she knows who might be able to put Maggie in a safehouse until they take Truman's scheme to the press. Until they get word, they have to sit tight and wait. Tommy and Natt walk out of the bar and are nearly blown up by another hit man, Phil Kelly.

A man in a trenchcoat arrives and puts a bullet in Phil Kelly's head. He tells Tommy Sean Noonan sent him, and knocks out Tommy.

Retrieved from "https://heykidscomics.fandom.com/wiki/Hitman_Vol_1_55?oldid=1434036"
Community content is available under CC-BY-SA unless otherwise noted.