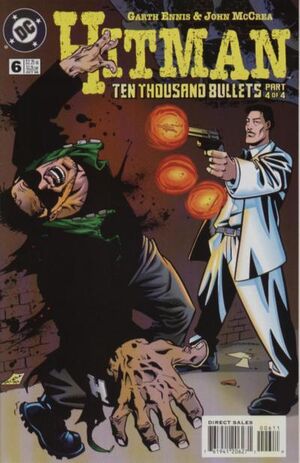 When I get to Hell, I wanna see that punk already there!

Johnny Navarone is bragging about his hitman prowess to Tommy Monaghan as he shoots Tommy. Nightfist's armor has apparently saved him from the bullets that Tommy and Natt fired at him in the previous issue, and he and Natt are rising despite their wounds. Natt throws a grenade at Navarone, and when it goes off he pulls Tommy out of the alley to his car. Navarone manages to fire a parting shot through Natt's calf as they get away. Tommy is near death, and he figures the only place close enough to escape to is Wendy's apartment, so Tommy and Natt travel there.

Wendy had thought Tommy was joking when he said he was a killer, and she reacts with panic when Tommy enters her apartment. At the Dubelz mansion, Johnny Navarone explains his failure to kill Monaghan to Moe Dubelz, who is gradually dying from his connection to his dead conjoined twin. Navarone has the addresses of Monaghan's companions, and he plans to start with Pat Noonan. Nightfist has tracked down some of Dubelz' employees and found out that it was Nicky Lincoln who used him as bait for Tommy Monaghan. Nightfist declares vengeance on Lincoln, Navarone, Dubelz, and Monaghan.

A week later, Tommy wakes up from a short coma. Wendy kicks him out of her apartment, furious that he made her look foolish and outraged that he kills people for a living. Natt and Tommy leave, dropping Sean off before heading to Pat Noonan's apartment. On the way, they see Nicky Lincoln, and Natt runs over his Lincoln's feet, pulverizing them. Natt explains to Tommy that Pat had been by to see Tommy when he was injured and that Pat looked troubled when Natt introduced himself as Tommy's best friend. At Pat's apartment, Tommy and Natt find Pat dying in his bathtub, having been disemboweled by Johnny Navarone. Pat tells Tommy that Navarone was looking for him, but Pat revealed nothing, wanting to prove that he was tough. Tommy euthanizes Pat and declares vengeance on Moe Dubelz and Johnny Navarone.

Retrieved from "https://heykidscomics.fandom.com/wiki/Hitman_Vol_1_6?oldid=1433986"
Community content is available under CC-BY-SA unless otherwise noted.