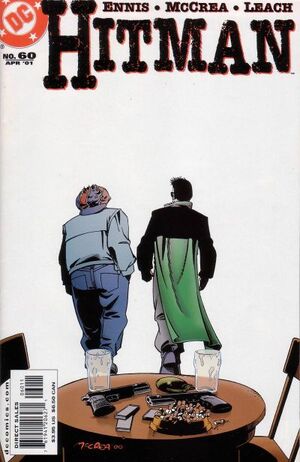 Drinks on the house, fellas. There ain't no closin' time. But you gotta leave your guns at the door.

Tommy Monaghan and Natt the Hat have a beer at Noonan's Bar.

Deborah Tiegel packs her jeep for her move to New York.

On a rooftop across the street, Lieutenant Connolly observes Noonan's with two police officers.

Back in Noonan's Natt and Tommy talk with Maggie Lorenzo. Maggie tells Tommy she's decided to name her unborn son Tommy. Tommy and Natt talk with one another, psyching themselves up for the battle they know is coming. Hacken shows up with a shotgun and Tommy knocks him out so he doesn't get involved and get killed.

Natt and Tommy step outside the bar with Maggie and two jeeps of armed men approach, guns blazing. The two hitmen push Maggie to cover behind a car and return fire. A sniper shoots off Tommy's left hand. Kathryn arrives in the FBI helicopter and takes out the sniper.

Tommy, Natt and Maggie make a run for it and Natt is shot in the chest. They take out their opponents and run for the chopper. Natt falls to the ground and Tommy gets Maggie to the chopper, telling Kathryn to get her to safety. Then he runs back into the thick of things to get Natt. Tommy kills Truman and is shot. He falls next to Natt and the two best friends die together.

Retrieved from "https://heykidscomics.fandom.com/wiki/Hitman_Vol_1_60?oldid=1434041"
Community content is available under CC-BY-SA unless otherwise noted.