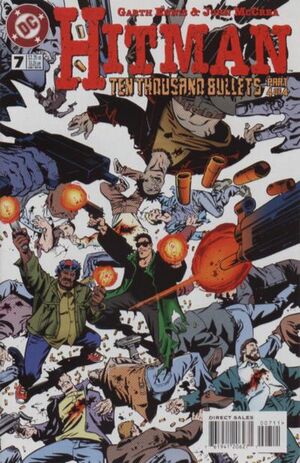 Nicky Lincoln comes to Moe Dubelz to inform him that Tommy Monaghan is still alive, a fact Dubelz already knows. Tommy Monaghan and Natt the Hat drive a car through the Dubelz mansion, crushing Nicky Lincoln against a wall. Tommy and Natt open fire on the Dubelz crime family, killing many of Moe Dubelz' thugs. Johnny Navarone helps Moe Dubelz to escape the gunfire. Nightfist has also chosen to ambush the Dubelz family, and he crashes through the window. Tommy, Natt, and several Dubelz thugs open fire on him, killing him. While Natt kills a hulking Dubelz chef, Tommy tracks down Moe Dubelz, pumping several rounds into him. It seems that nothing can kill Dubelz, as the mobster advances on Tommy despite missing parts of his head. Tommy finishes him off with a shot through the head.

Tommy reaches the roof of the mansion, where Johnny Navarone shoots him through the arm. Tommy gets off a wild shot as he falls and manages to blast apart Navarone's hand and gun. Navarone tries to convince Tommy not to kill him, arguing that hitmen are better than all the scum Tommy and Natt have killed. Tommy retorts, "We're all scum," and kills Navarone. Natt finds Tommy on the roof, saddened by the loss of his best friend and girlfriend, and he encourages him to soldier on despite his loss. The two leave the Dubelz mansion before the police arrive.

Retrieved from "https://heykidscomics.fandom.com/wiki/Hitman_Vol_1_7?oldid=1433987"
Community content is available under CC-BY-SA unless otherwise noted.