Start a Wiki
Part of the 'Final Night' event 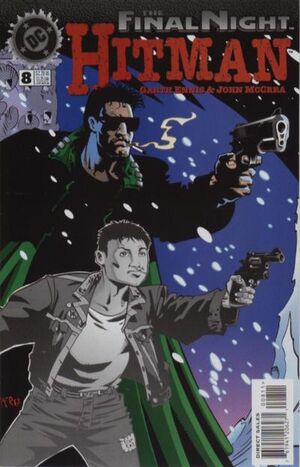 Appearing in "The Night the Lights Went Out"Edit

Synopsis for "The Night the Lights Went Out"Edit

The Final Night has come, and the sun is gone. Tommy, Sean, Natt, Hacken, and Ringo are in Noonan's Bar, trying to keep warm and pass the time. Sean regales the group with a story from the Korean War. He and his sergeant were the only Americans who had survived a recent battle, and they had to hold a hill against an oncoming regiment of North Korean soldiers. They had little ammo, and the odds were against them. Fortunately, they were saved by an airstrike from a fighter jet. But Sean's sergeant had suffered a fatal shot before the airstrike, and he died.

Natt starts his story about a drug transaction in Detroit. His gang, the Rollin' Sixties, wished to trade crack for guns owned by another gang. Duke, the leader of the other gang is the man who got Natt's sister pregnant and walked out on her, and Natt hoped to exact some revenge on him. Nero, the leader of the Rollin' Sixties, tells Natt that Natt will be the one to bring the guns to the other gang, but he tells Natt that instead of crack, he will be carrying a suitcase containing nothing save a note saying that Natt will waste the man who got his sister pregnant. If Natt refuses, he will be shot. Natt brings the empty suitcase over and opens it. Duke tells him to duck, exposing himself as a police officer. His gang opens fire on the Rollin' Sixties, saving Natt. Duke apologizes to Natt for knocking up his sister and leaves.

Hacken tells a ridiculous story about killing chickens in a poultry processing plant, apparently missing the theme of near-death experiences. Ringo chimes in with his story about a hit he performed in Hong Kong. He had killed a group of men and was lingering on their balcony, when a man appeared behind him. Ringo fired a point blank shot into him, but the man was unaffected. The man noted Ringo's appreciation of a good view and the dead men's champagne and said that he was here for the dead men. Then he walked away, leaving the three bullets Ringo fired at him on the balcony railing.

As Ringo finishes his story, a man bursts into the bar brandishing an axe. Sean recognizes him and sends him back home to his family. Tommy then starts his story about a neighborhood bully, Richie Reggiane, who used to steal comic books from him and Pat Noonan. Tommy decides to stand up to Richie and ends up getting punched for it. He declares revenge. He rounds up a group of neighborhood boys to kick Richie's ass. After doing so, they hang out in a park, laughing about the event. Richie returns with a gun, threatening to shoot Tommy, but Tommy is able to stare him down, making him feel accountable for his actions.

Retrieved from "https://heykidscomics.fandom.com/wiki/Hitman_Vol_1_8?oldid=1433988"
Community content is available under CC-BY-SA unless otherwise noted.