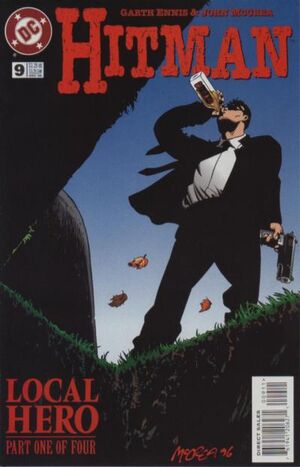 We the undersigned respectfully request that Superman get a proper haircut like he used to have.

Tommy and his friends are at Pat Noonan's funeral. Even Hacken has shown up, despite Pat's constant teasing of him. But Hacken admires Pat's last heroic act in the face of pain and torture. Later, Tommy and Sean retire to Noonan's Bar, where three douchebags are telling Irish jokes. Tommy puts his gun on the table and finishes the punchline for them. They exit with great haste. Tommy explains to Sean that he has borrowed money from Men's Room Louie, a Gotham City mafioso, to make a bet on a ball game. Sean expresses his paternal feelings toward Tommy, who had previously been looked after by his nephew Pat.

At the same time, Deborah Tiegel is sitting before a panel of Gotham City Police Department administrators, justifying her actions in a recent gunfight in which she used the corpse of a fellow officer as a shield. Captain Burns lures Tiegel into going off on a tirade about the corruption of the GCPD, practically sealing her career's fate. It turns out she has been suspended without pay, and she returns to her desk to find dog excrement in one of the drawers. She accuses Detective Brown, the partner of the man she used as a shield, and starts a fight that ends with Brown drawing his weapon on her. The fight is broken up by another officer.

Two men from the U.S. government, Truman and Mr. Feekle, approach Capt. Burns about Tommy Monaghan. They have evidence linking Tommy to the Dubelz mansion massacre, and they are willing to hand it over to the GCPD if Tommy refuses to work for them. The deal is made with the stipulation that if Tommy refuses, the GCPD will kill him, making it look as if he were resisting arrest. Tiegel has been eavesdropping on this conversation.

At Noonan's Bar, Sixpack is regaling Tommy with tall tales of his battles with Bane and Doomsday while Sean tries to collect signatures for a petition demanding that Superman get a decent haircut again. Truman and Mr. Feekle enter the bar and approach Tommy with an offer of employment. They work for a government office that monitors and manipulates metahuman activity, and they want Tommy to act as their hired gun, taking down metahumans who go after corporate criminals or use their powers to protect the environment. Tommy declines.

At Pat Noonan's apartment, Tommy is mourning Pat and going through his belongings when the GCPD show up outside, demanding that he come out and surrender.

Retrieved from "https://heykidscomics.fandom.com/wiki/Hitman_Vol_1_9?oldid=1433989"
Community content is available under CC-BY-SA unless otherwise noted.