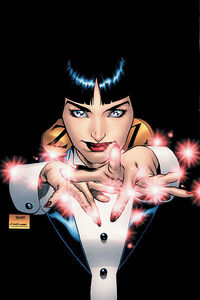 Homo Magi is a sub-race of naturally magic-wielding humans. According to Doctor Mist, the Homo magi evolved in a parallel but separate line, alongside Homo sapiens.[1] Homo magi have are naturally adept at magic; while all humans can learn to use magic, Homo Magi are more talented at it.

Darkworld was a dimension created by an unnamed cosmic entity who later fell into a deep sleep. This entity's dreams were responsible for creating the first Lords of Chaos and Lords of Order, Chaon (chaos), Gemimn (order), and Tynan the balancer. These beings and others became the gods of Atlantis. Darkworld was tethered to Atlantis by a massive chain created by Deedra goddess of nature, much in the same way Ifé, the home dimension of the Orishas, is tethered to Earth by an iron chain.

In the DC Universe the Homo magi apparently originated on the lost continent of Atlantis. The continent was a focal point for unharnessed magical energies (wild magic), and the local Homo sapiens evolved into Homo Magi as a result of their exposure to these energies. Those humans who gained these inherent mystic abilities interbred for thousands of years, concentrating and strengthening the genetic predisposition. Upon the fall of Atlantis, people who carried the predisposition scattered to the four winds. Today, every human being capable of casting spells is a descendant of the "Homo magi".

Homo magi are genetically compatible with normal humans, and are genetically identical to normal humans. The mysterious property that makes them homo magi is somehow "dominant" like a gene, the child of a normal human and a Homo magi will always be Homo magi. How and why this trait expresses itself the way it does has yet to be recorded. Apparently that altered Atlantean genome is the difference between Homo magi and regular human magic users. Sindella (Zatanna's mother), Arion, Atlan and Tempest are all famously powerful magic users and presumably all Homo magi. Known offspring of Homo magi are Zatanna, daughter of Sindella and the original John Zatara, and Traci Thirteen the daughter of Doctor Thirteen and an unknown female member of the Homo magi.

The dimension where the Gemworld is located was originally owned by the Lords of Chaos. However, thousands of years ago, when magic began to drop in level on Earth due to a change in the alignment of the stars (due to a star going nova) the sorceress Citrina went there and struck a deal with the Lords of Chaos so she would be allowed to create a realm there for those wizards who wanted to emigrate from Earth. It would seem that Gemworld like Skartaris was colonized by Homo Magi emigrants from Earth. All of Gemworld's inhabitants can use magic, though most only at a very pedestrian level. Gemworld was the home of Amethyst, Princess of Gem World.

Led by Doctor Mist the Homo magi created a hidden retreat in the mountains of Turkey called Hidden City, out of fears their uniqueness would be absorbed and diluted by the Homo sapiens. Powered by the Medulla Jewel the City is then shifted into another dimension for protection.

Another hidden retreat of the ancient Homo magi out of Atlantis was apparently Doctor Mist's African kingdom known as Kor. Seven thousand years ago Doctor Mist, also known as Nommo, was the wizard-king of the mighty African empire of Kor, and he was the guardian and chosen disciple of the mystic Flame of Life. The Flame was coveted by a sorcerer known as Felix Faust. When Faust attempted to kill Nommo, and take the Flame for himself, Nommo absorbed the Flame and used its power to hurl Felix Faust into another dimension, sadly destroying Kor in the process. In order to nurture the growth of the Homo magi and produce a candidate powerful enough to be his bride, Nommo created magical jewels known as the Stones of Life. He gave the stones to the Homo magi to aid in their growth.

Land of the Nightshades

The Land of the Nightshades was home to Even Eden's (Nightshade) unnamed race of Homo magi exiles. Her brother while possessed by a demon called the Incubus killed all the former inhabitants.

Atlantean survivors of the city of Challa-Bel-Nalla, then ruled by Lord Daamon an ancestor of Deimos, formed an alliance with an alien race they called the Red-Moon Gods. These aliens provided the Atlanteans with advanced technology that Travis Morgan would later discover in New Atlantis.

Atlantean descendant humans and Homo magi led by Lord Norrad the Younger, apparently made it all the way to the strange dimension known as Skartaris, a world of eternal sunlight. Jennifer Morgan daughter of Travis Morgan the Warlord is a Sorceress of Skartaris, as is Deimos the Warlord's archenemy.

Through sorcery they can develop abilities such as telekinesis, flight, energy projection and molecular manipulations, and countless abilities.

Habitat: Terrestrial
Gravity: 1kg
Atmosphere: Homo Magi thrive in an oxygen/nitrogen rich atmosphere, though, if under the protection of powerful spellcraft or in possession of magical objects with protective abilities, they can live under most atmospheric conditions.
Population: Unknown, a few thousands

Type of Government: none, formely they used to be monarchical
Level of Technology: low
Cultural Traits: rich
Representatives: Zatanna

Not all magic users in the DC Universe are Homo magi.

Retrieved from "https://heykidscomics.fandom.com/wiki/Homo_Magi?oldid=1533514"
Community content is available under CC-BY-SA unless otherwise noted.