View source
This page has partially the function of an index: The titles written in bold are listed in the contents links to other articles. 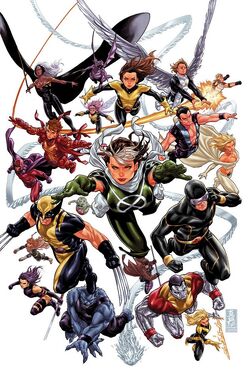 Affiliation
Representatives among the X-Men, Avengers and Brotherhoods.

Base Of Operations
Earth, primarily and Jean Grey School for Higher Learning, but also New York City and other locales; formerly Utopia and Genosha

Origin
A Homo sapien superior (also known as "mutant") is a being born with a genetic anomaly that grants them an extra-normal ability not possessed by normal humans. This anomaly is known as the "X-Factor" or "X-Gene."

We're mutants. Born different from baseline humanity, with an enhanced genome that gives us super-powers. You piss us off at your peril.

Human mutants (or Homo sapiens superior) were created by a star-faring race of humanoid aliens called the "Celestials". Approximately one million years ago, these beings came to Earth and performed various genetic tests and experiments on Earth's highest lifeforms, the nascent human being. To test the versatility of human genes they implanted strands of a dormant DNA complex which would one day permit uncanny mutations of the enormous scope in humanity.The abilities granted by the presence of this X-Gene can be minuscule to god-like, as evidenced by the great variety of powers exhibited by the many well known mutants of Earth. For example, many of the X-Men, and former members of the Brotherhood of Mutants are quite powerful, while others possess seemingly trivial abilities.

The first recorded human mutant on Earth was Selene, known to have been active during the Hyborean Age (roughly 14,000 BC to 10,000 BC). En Sabah Nur followed millennia later, born in 30th Century BC Egypt and Garbha-Hsien in the Ho-Lo Shan Mountains of Northern Mongolia, China later still. During the time in which Apocalypse went into hibernation, only a handful of mutants emerged, including Nicodemus, Victor Creed, Raven Darkholme,John Howlett Jr., James Howlett, and Jonas Graymalkin. There was an exponential increase in the mutant population during the 20th century. A popular explanation for this marked growth is the proliferation of nuclear technologies in the modern era. However, earlier forms of mutants, not from Homo sapiens appeared, as Devil Dinosaur and Moon Boy.

450px|thumb|The three word spell Mutants grew sharply in number during recent years, but on M-Day the Scarlet Witch used her magics to depower approximately 91.4% of the world's mutant population,[22] leaving most without any trace of an X-Gene.[23] At this time, there were around 300 individuals who were recognized as mutants, with 198+1 registered by the US government.[24] Many mutants were later revealed to be powered, having hidden their mutant powers or/and their presence to the world.

The Decimation was supposed to have affected each DNA's mutant, even separated from his source: Mutant Growth Hormone (MGH) provided by lot of mutants was revealed to be inert, as their origin mutants were depowered. On the other side, Whirlwind's MGH was still active while himself kept his powers.[25] More recently, a clone of the Blob was produce, while his clonal source was still depowered.

The Terrigen Mist was used to mimic or reactivate X-Gene granted abilities in several former mutants, but the effects were dangerous and temporary.

Almost all mutants from alternate realities residing in the Earth-616 reality retained their powers (i.e. Bishop, Dark Beast, Rachel Grey, Sugar Man, etc.),[26] but this is apparently just a coincidence, since Jon Spectre lost his powers. There also appears to be some confusion about M-Day's effects on the Multiverse:

There are no records of non-Homo sapiens superior mutants being depowered, such as Ariel or Ultra-Girl, and neither of Earth-TRN113's mutants, showing the Decimation seems to have affected only the humans mutant carriers of the X-Gene on the 23rd chromosome. Ill mutants from radiation, and not those taking their mutantcy from an X-Gene, who were granted with powers, do not seem to have been affected by the spell, as with Kaga, born from a mother suffering from radiation sickness after the bombing of Hiroshima.[27]

Also, as there has not been any proof of mutant depowering through space (The mutant Skrulls of the Cadre K were confirmed powered before the Secret Invasion)[28] and as Anthony Stark stated that he and his men were unaffected by the No More Humans spells of his world's Scarlet Witch because they were in outer-space at the time of the House of M,[29] it is possible that the spell only affected Earth (through the Multiverse however). But on the other hand, Doctor Strange showed to Beast that the Scarlet magic had affected left a print in the whole reality.[30]

There was only a handful of mutants born or activated between M-Day and dispersion of the Phoenix.

thumb|200px The Phoenix Force came to Earth in order to claim Hope Summers as its host and to restore mutantkind. A conflict erupted between the X-Men who believed that the Phoenix was coming to save mutantkind and the Avengers who believed that the Phoenix was coming to destroy the Earth.[31] After much conflict, the X-Men, lead by Cyclops, were proven right. Hope Summers and the Scarlet Witch used the Phoenix to reverse the M-Day effect and new mutants began to emerge across the globe.[32]

After the dispersion of the Phoenix and the activation of new mutants, several mutants powers began to be adversely effected. Beast,[33] Colossus,[34] Cyclops, Magneto, and Emma Frost have all experienced some level of power instability, while Magik's powers were actually enhanced.[35]

Only a few former mutants have regained their powers lost on M-Day after the dispersion of the Phoenix.

Before the Wild Sentinels attack on Genosha, the mutant population was estimated at 17 million, which decreased to 1 million after the attack.

The M-Day took that population down to a few hundred, as most of the mutants were depowered and/or killed.

At the time of the Decimation, there were around 300 individuals who were recognized as mutants, with 198+1 registered by the US government.[24] Many mutants were later revealed to be powered, having hidden their mutant powers or/and their presence to the world, while many of the still-powered were killed during the violence following the depoweration.

After Necrosha and the loss of many mutant lives, Doctor Nemesis stated that the mutant population consisted of 181 individuals.[36]

Since the dispersion of the Phoenix, there is been no clear determination of the mutant population, but new mutants are to be counted at least in dozens.[32]

It was stated by the Skrull Ch'rith that there were only twelve mutants teleporters, including Nightcrawler, Lila Cheney, Vanisher,[37] and seemingly Pixie.

Steve Rogers stated that Blindfold was the sole remaining precog among the past larger number of them.[5]

Variable. Most do speak fluent English.

Secondary Mutation is a phenomenon in which an existing mutant gains additional powers, or a change in appearance.

The mutant breeding include notable implications, regarding to the transmission of the mutant genome, or to the hybridization with others species from human or alien species.

Across the Multiverse, many incarnations of the mutants existed. The most recorded ones are similar or presumably similar to the Earth-616 : Homo sapiens evolving into Homo sapiens superior (commonly called Homo superior ), by the adding of a X-Gene in their genome from different sources. On others time-line, they are known as Homo mutandis (The Changed Man) on Earth-889,[20] or Mutantur (The Changing Ones) (also called Witchbreed) on Earth-311.[38] On Earth-2301, mutants are called Homo superior, but the telepaths Homo sapiens supreme.

Though in most of the universes, the X-Gene was presumably set by the Celestials, in the Ultimate Universe, the X-Gene is a creation of the US government weapons project in Canadian facilities. This reality's Wolverine was the first of those mutants, and was called the Mutant 0. This mutation is close to a virus, infecting the population slowly and turning them in mutants.[39]

Others mutants, from Earth-TRN113, differed from mutants on Earth-616 in that their X-Genes are not on the 23rd chromosome, but instead on chromosome 13. Those mutants weren't affected by the M-Day and were invisible to Cerebra's detection, as it was only capable of locate a protein produced on a X-Gene on the chromosome 23. It was stated that it was possible that the chromosome 13th carrying the X-Gene had been genetically created for the scouts to stay hidden from devices such as Cerebra, but this statement was considered less possible as the alternate reality origin of those mutants was confirmed.[40]

In realities where others species rather than Homo sapiens ascend as the dominant species, mutants still exist, as most of them multiversal counterparts to their humans alternates.

Should also be mentioned the Acanti-like mutant, the Xavier demon and the giant squid-like Xavier, although it is unknown if those Xavier were exceptions in their home-realities.[41]

The mutants can be divided into multiple categories, regarding to their origins, genetic status, powers, etc.