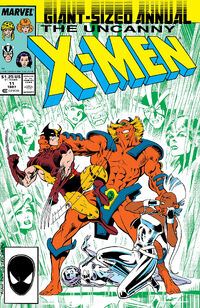 Horde was an alien warlord who abducted the X-Men and their allies Captain Britain and Meggan to use as his lackeys to retrieve the Crystal of Ultimate Vision, of which he wore a shard on his forehead.

Desiring the rest of the crystal, Horde coerced the X-Men to travel to the Citadel of Light and Shadow, where the crystal was hidden. As the X-Men progressed through it, the citadel created illusions of each of them's most powerful desire. Only Wolverine, Storm and Psylocke were able to resist. Psylocke, who had been transformed into a metallic warrior as part of her heart's desire, sacrificed herself to slow Horde down, while Wolverine pushed Storm back into the simulation of her heart's desire to save her, leaving Wolverine to face Horde alone.

Wolverine reached the crystal, only to discover that Horde had merely used the X-Men to divert the citadel's defenses away from him. Horde cut Wolverine down, and removed his heart as a trophy. However, a lone drop of Logan's blood splattered the Crystal, which gave out enough energy for Wolverine to be restored. Empowered to godhood, Wolverine plucked the crystal shard from Horde's forehead, and the tyrant quickly aged and crumbled into dust within seconds. Wolverine rejected the god-like power, and returned the X-Men and their friends home.