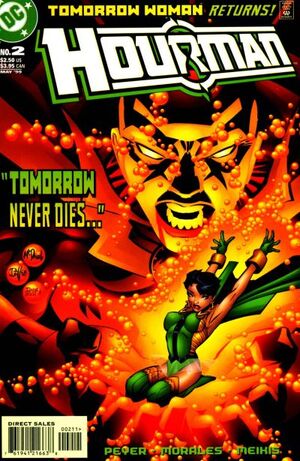 Don't waste time indulging yourself in blame. It's all I ever did, until... until I acted.

Appearing in "Romancing the Tombstone"Edit

Synopsis for "Romancing the Tombstone"Edit

Having been struck by a time-vision blast, Bethany Lee is now trapped in the form of a toddler. She is waddling across a busy thoroughfare, but fortunately officer Gary Lenin sees her and snatches her up before she can endanger herself any more. He calls police chief Audrey Lee and tells her that he just found a baby out near Snapper Carr's house. Audrey distrusts Snapper and tells Levin to go "rattle his cage".

Meanwhile, Snapper Carr and Hourman awaken inside Snapper's house. Hourman is still agitated by his recent battle with Amazo and cannot understand why someone would create such a soulless, evil android. He decides to seek out Amazo's creator, Professor Ivo.

Hourman flies to Belle Reve prison and interviews Professor Ivo. he asks Ivo why he created a robot for evil. Ivo tells him that he did so in order to compensate for rival T.O. Morrow's contributions to the Tomorrow Woman android. In his words, Morrow made her "too perfect". Hourman learns that Tomorrow Woman exceeded her programming and sacrificed herself to save the world. He is determined to learn more about her.

Later, Snapper, Gary and baby Bethany go to the Mad Yak Café. Snapper orders some food for the baby. Chief Audrey Lee comes into the place and interrogates Snapper concerning the whereabouts of her missing daughter Bethany. None of them yet realize that the baby in their hands actually is Bethany. Unsatisfied with Snapper's flippant responses, she has officer Lenin take him down to the station.

Meanwhile, Hourman goes to Chapel Hill Cemtery and snatches Tomorrow Woman from the past at a point before she died. She is confused and Hourman explains that she will stay in this timeline for exactly one hour and that he seeks kinship with another of his kind. He tells her that in her immediate future, she nobly sacrifices herself to save the world and that she is heralded as a hero. Inspired by what she learns, Tomorrow Woman wants to use her new borrowed time to do some good. Hourman and she foil a robbery and bring the thieves into the Happy Harbor police station.

When they arrive at the station, they find that police chief Lee has arrested Snapper and is charging him with the murder of Bethany Lee. Even officer Lenin thinks the charge is ludicrous as there is no evidence to suggest that Bethany is dead. At this point, Hourman learns that Chief Lee's enmity towards Snapper is due to the fact that he was once married to her daughter.

Hourman recognizes the baby as Bethany Lee and realizes his blunder. He uses his time-vision to revert her to her correct physical age.

Unfortunately for Tomorrow Woman, her hour of power is up. Content with the knowledge that she will make a difference, she disappears back into the timestream.

Elsewhen... crowds of people stand along the curb of a busy thoroughfare in Dallas, Texas on November 22nd, 1963. They await the arrival of the motorcade carrying president John F. Kennedy. Amongst the crowd are a hodgepodge of aliens and futuristic space-men.

Retrieved from "https://heykidscomics.fandom.com/wiki/Hourman_Vol_1_2?oldid=1524221"
Community content is available under CC-BY-SA unless otherwise noted.