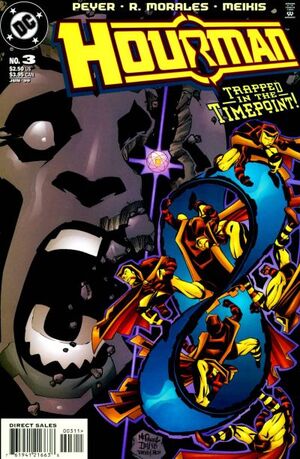 The timestream makes you formidable, clockwork man, but out here -- you're nothing!

At some indeterminate point in the future, an evolved version of Hourman fights against Epoch for the sake of preserving the Timepoint. As he sees the Timepoint fading away, he realizes that he must travel backwards along his own timeline in the hopes of tracking Epoch down.

In the present, Snapper and Bethany introduce Hourman to the splendor of the Mad Yak Café. Hourman takes a sip of coffee and realizes just how much of an effect caffeine has on an android from the 853rd century. Bethany, completely enraptured by the concept of a time traveler, wants Hourman to show her more of "his world". He takes Snapper and she for a trip aboard his Timeship. Along their journey, they encounter a Hypertime variant of Snapper Carr. Unfortunately, their jaunt has taken them outside the space/time continuum, which leaves them vulnerable to an attack by Epoch. Epoch appears and forces them off the Timeship, stranding the three of them in a pocket of null-time. The setting is a black and white recreation of Dallas, Texas on November 22nd, 1963, the day President John F. Kennedy was assassinated. Populating this setting are several out-of-place entities such as aliens and a futuristic super-hero who calls himself the Catastronaut.

Hourman only has an one hour to get to the bottom of this mess. Flying outward, he realizes that this area is actually a sealed off section of the Timepoint that Epoch has fashioned into a sort of chronal prison for his enemies. Unfortunately, Hourman's hour ends and he returns to the Dallas setting and meets back up with Snapper and Bethany. He tells them that since time does not pass in this region, he will not be able to regain his "hour of power". They are trapped here.

Retrieved from "https://heykidscomics.fandom.com/wiki/Hourman_Vol_1_3?oldid=1434128"
Community content is available under CC-BY-SA unless otherwise noted.