Start a Wiki
Part of the 'Day of Judgment' event 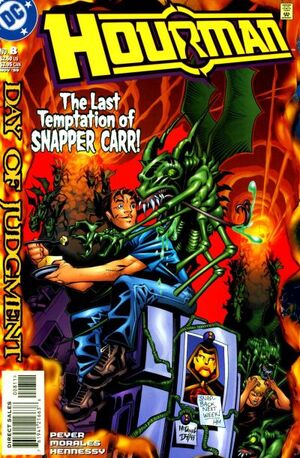 If you don't stop annoying me human, I will chew out your eyes! I mean it, human...

Appearing in "A Week With No Hourman"Edit

Synopsis for "A Week With No Hourman"Edit

Snapper Carr wakes up and feels terrible. He desperately needs a cup of coffee. Walking outside, he sees a demon chasing a priest. Snapper helps the priest avoid the monster's clutches, but the priest does not seem incredibly grateful.

Hourman suddenly appears and tells Snapper that he learned about the demonic invasion of the Earth from one week into the future by using his time-vision. He wants to help, but is suddenly pulled into the timestream by unexpected forces.

Snapper goes to Riker's place and orders a cup of coffee and some cheesecake. He reflects upon the time he spent with the original Justice League and still feels guilty for exposing the location of their secret headquarters.

Suddenly, a demon named Torture bursts into Riker's and begins assaulting the place. Snapper tries to convince the demon that he doesn't need to live this sort of life simply because he feels a demonic responsibility towards doing so. He offers Torture some cheesecake, but the demons refuses. Snapper keeps badgering him until Torture finally relents and tries it. Oddly, he ends up loving it. The lesson being: on Earth, the demon has free will and can do anything that he likes, even if it means simply sitting down and enjoying some cheesecake.

Meanwhile, Wendi Tyler visits her dying son Rick in the hospital. He tells him that somebody broke into his father's lab in Long Island and stole some Miraclo. Though weakened, Rick is determined to find this thief and kill him. He falls out of his bed and scrambles about until he finds a stash of Miraclo tablets.

Retrieved from "https://heykidscomics.fandom.com/wiki/Hourman_Vol_1_8?oldid=1524200"
Community content is available under CC-BY-SA unless otherwise noted.