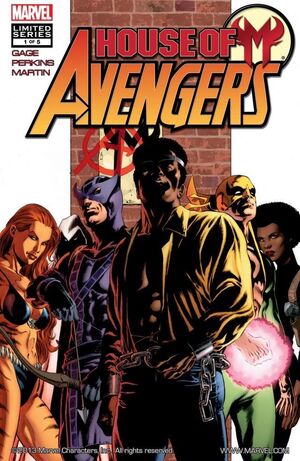 Luke Cage has made it to Manhattan, the streets crawling with mutants. But they ain't his concern. He proves how hard his skin was by picking a fight with a mutant with a bull head and breaking his horns. He arrives in Harlem, where he confronts an old friend of his, Willis Stryker, a snake-face mutant who "protects" Sapiens.

A flashback explains that Stryker and Cage were friends, who weren't concerned that they were a mutant and poor kid respectively. They were like brothers, always looking out for each other, until they met a girl named Reva. Reva fell for Cage, infuriating Stryker. So he planted heroin in Cage's home and tipped of the police, causing Reva to move onto Stryker, mainly because he had money. However, the heroin he planted to implicate Cage wasn't paid for and Reva was killed by a hit man.

In prison, Cage was offer by Dr. Jonas Harrow for a chance to reduce his twenty year sentence, by participating in a brutal experiment to make him a supersoldier for the war against mutants led by Magneto. But eventually, Cage decided he had enough and escaped. By the time he made it back to civilization, Magneto had already won and mutants began outnumbered regular humans.

In the present, Cage and Stryker fought, showing off each other's abilities. When Stryker realized he couldn't even scratch or bite his old friend, he decided to pull a grenade. Cage survived and took over Stryker's gang, who are more than glad that Strykeer is gone. They go to Hell's Kitchen in Sapien Town, where Cage carved out territory against Cockroach Hamilton, Piranha Jones and Hammerhead for territory. He soon began recruiting certain Sapiens with special abilities, like Hawkeye, Moon Knight, Mockingbird and Iron Fist. One day, he chased off a Sapien gang beating up a mutant with tiger qualities. However, the woman, Tigra, wasn't a mutant, but could pass for one. He also decided to take her in.

Meanwhile, the Sapiens in the NYPD needed to prove themselves to the mutants. Therefore, they dispatch Misty Knight to infiltrate Cage's organization and bring it down from the inside.

Retrieved from "https://heykidscomics.fandom.com/wiki/House_of_M:_Avengers_Vol_1_1?oldid=1508518"
Community content is available under CC-BY-SA unless otherwise noted.