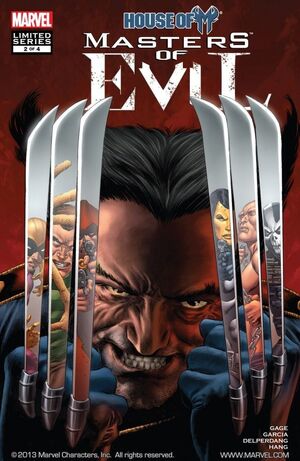 We'll never be able to accomplish what we really want to under a mutant-run government. The Joe Colombo model won't fly anymore. But history still tells us where to go from here. We need to do what the mob tried to do in the fifties. What they almost pulled off with Cuba. What Magneto did pull off with Genosha in his rise to power. We need our own country.

What is the Sapiens Rights League, and how is it connected to the Hood’s crime spree? That’s what S.H.I.E.L.D. wants to know, and they’re sending in the elite Red Guard to investigate. Here comes Rogue, Nightcrawler, Mystique and Wolverine! And when several members of the Hood’s super-villain gang are captured, will he stage a mid-air Helicarrier jail break…or is there no honor among thieves?

Retrieved from "https://heykidscomics.fandom.com/wiki/House_of_M:_Masters_of_Evil_Vol_1_2?oldid=1432585"
Community content is available under CC-BY-SA unless otherwise noted.