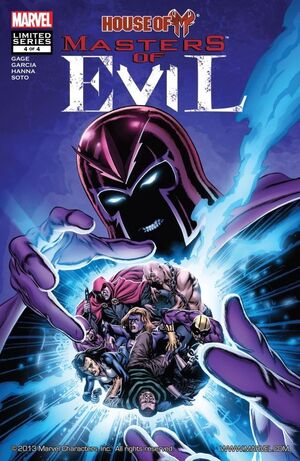 We're gonna show Magneto he made the biggest mistake of his life. He created martyrs. We showed the world what Magneto's really made of. That he needs to be taken down, and that it's up to us to do it. Parker Robbins was no saint. He never set out to be a hero. He was trying to pull off the ultimate con. And he did. He conned himself into believing there was something worth dying for. Let's prove him right.

Appearing in "Honor Among Thieves"Edit

Magneto strikes in the shattering conclusion! The ruler of the House of M has targeted the Sapien homeland established by the Hood and his gang. With his wrath about to fall on their city and its helpless citizens, will the villains take the money and run? Or will they stay and fight a suicidal battle against impossible odds? Either way, there's going to be a high body count...especially when Wolverine, Rogue and the rest of the Red Guard come to town!

Retrieved from "https://heykidscomics.fandom.com/wiki/House_of_M:_Masters_of_Evil_Vol_1_4?oldid=1529976"
Community content is available under CC-BY-SA unless otherwise noted.