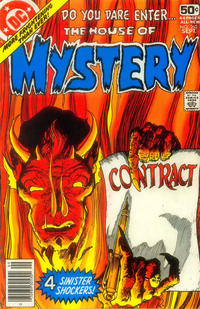 Appearing in "A Demon Shared"Edit

Synopsis for "A Demon Shared"Edit

Identical twins suffer being possessed at different times by a single demon.

Appearing in "The Monster of Darkwood Down"Edit

Synopsis for "The Monster of Darkwood Down"Edit

In 1168 A.D. England a monster plagues the villagers. A knight is sent out to defeat the beast, but only succeeds in cleaving it in two, creating two of them.

Synopsis for "Go To Hades"Edit

Retrieved from "https://heykidscomics.fandom.com/wiki/House_of_Mystery_Vol_1_260?oldid=1434411"
Community content is available under CC-BY-SA unless otherwise noted.