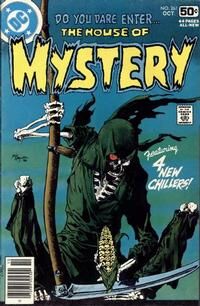 An unemployed man with an overbearing wife passes a farm with a help wanted sign and she demands he apply for the job. He finds a hooded figure in the cornfield who tells him the job consists of collecting the corn each day and eating it. When he tells the man there are no wages, he begins to protest his wife wouldn't like that but the figure removes his hood revealing Death. He explains that for one man to be born another must die and reveals that there are individual faces upon the corn kernels, including the man's wife. He joins in the feast.

Appearing in "In the Two Faces of Death!"Edit

Synopsis for "In the Two Faces of Death!"Edit

A wife of a Nazi commandant in a WWII death camp skins a gypsy with various tattoos in order to make a lamp shade out of it. She is acquitted in an immigration trial where Jewish witnesses to the atrocities accuse her and she goes back home into the attic where she keeps her lamp shade, the only memento to survive all these years. The tattooed creatures come to life off the lamp shade and kill her, placing the dead man's camp number tattoo upon her wrist.

Retrieved from "https://heykidscomics.fandom.com/wiki/House_of_Mystery_Vol_1_261?oldid=1434412"
Community content is available under CC-BY-SA unless otherwise noted.