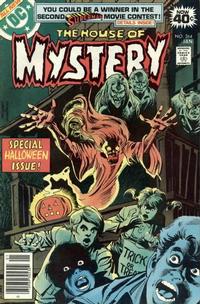 Appearing in "Then Beggars Could Ride!"Edit

Synopsis for "Then Beggars Could Ride!"Edit

A crooked security guard comes up with a plan to murder the carnival owner but he doesn't reckon on the merry-go-round's wooden horses seeking vengeance.

Appearing in "The Stygian Walk"Edit

Synopsis for "The Stygian Walk"Edit

A man who keeps his money in a cavern vault employees a werewolf to guard it. The man's son arranges a fatal accidental for his father so that he can get his hands on the money. What he doesn't know is that the werewolf locks himself in the vault on nights of the full moon and the vault opens on a timer in the morning. The son follows the werewolf into the cavern while its in human form and the son confronts the werewolf in the vault and the werewolf attempts to get him to exit the vault but the son plans to kill him so refuses to leave. The vault door swings shut locking the two inside together, the werewolf transforms and the son meets his fate.

Appearing in "Through A Glass, Darkly"Edit

Synopsis for "Through A Glass, Darkly"Edit

Retrieved from "https://heykidscomics.fandom.com/wiki/House_of_Mystery_Vol_1_264?oldid=1434415"
Community content is available under CC-BY-SA unless otherwise noted.