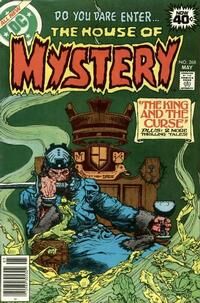 A scientist tests out a device designed to reduce a human body to stored information on a computer and then later reconstitute it on an unwilling acquaintance. The digitized person uploads himself into the electrical system and takes his revenge.

A hitchhiker who murders a trucker for his rig gets road directions over the CB from a woman in Hell who leads him straight to her.

Appearing in "The Man Who Spoke With Spirits"Edit

Synopsis for "The Man Who Spoke With Spirits"Edit

Retrieved from "https://heykidscomics.fandom.com/wiki/House_of_Mystery_Vol_1_268?oldid=1434419"
Community content is available under CC-BY-SA unless otherwise noted.