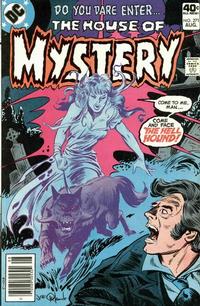 A biology student resolves to murder a physics professor as he has discovered the chemical means to extract the man's knowledge and wishes to possess it for himself. However, his roommate is envious of his good grades and murders him to try to procedure upon himself. It works, but he gets to relive his friend's death over and over.

Appearing in "The Hell-Hound of Brackenmoor!"Edit

Synopsis for "The Hell-Hound of Brackenmoor!"Edit

Retrieved from "https://heykidscomics.fandom.com/wiki/House_of_Mystery_Vol_1_271?oldid=1434422"
Community content is available under CC-BY-SA unless otherwise noted.