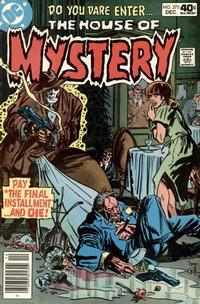 Drug dealers get more than they bargain for when it turns out that their shipment is contaminated with plague.

A man builds a robot woman to be his perfect mate, but after she is completed and he trips and knocks himself out, she attempts to dissemble his body in order to make improvements and is unable to understand why the now dead human remains unresponsive.

Retrieved from "https://heykidscomics.fandom.com/wiki/House_of_Mystery_Vol_1_275?oldid=1434426"
Community content is available under CC-BY-SA unless otherwise noted.