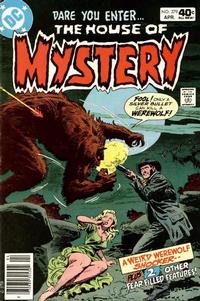 Appearing in "His Brother's Keeper"Edit

Synopsis for "His Brother's Keeper"Edit

A deformed brother with an interest in the occult searches the world over for a spell that will allow his spirit to transfer into his wealthy brother's body to avenge the injustices he feels done to him. By the time he finally locates an occult master in Asia who can teach him the spell his brother has died and the transfer merely results in his being buried alive.

Appearing in "Trial By Fury!"Edit

Synopsis for "Trial By Fury!"Edit

Synopsis for "Every Shroud Has A Silver Lining"Edit

Retrieved from "https://heykidscomics.fandom.com/wiki/House_of_Mystery_Vol_1_279?oldid=1434430"
Community content is available under CC-BY-SA unless otherwise noted.