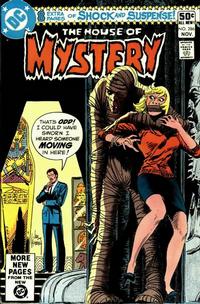 Appearing in "The Long Arm of the Law"Edit

Synopsis for "The Long Arm of the Law"Edit

In the year 2023 a police officer's damaged arm is replaced with a computerized limb which he programs to seek and destroy the cruelest man in the universe in a quest for revenge. His thirst for vengeance has so corrupted him that the arm ends up strangling himself.

Appearing in "Slave of the Pharaoh"Edit

Synopsis for "Slave of the Pharaoh"Edit

Synopsis for "The Man Who Died Tomorrow"Edit

Retrieved from "https://heykidscomics.fandom.com/wiki/House_of_Mystery_Vol_1_286?oldid=1434437"
Community content is available under CC-BY-SA unless otherwise noted.