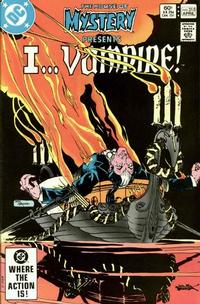 You'll do nothing, foul creature -- ever again! Your power play is ended... and by all that is good -- so is your vile existence!

Appearing in "The Lone Bat"Edit

Synopsis for "The Lone Bat"Edit

Andrew Bennett, Deborah Dancer and Dmitri Mishkin are in Washington Square Park during a public speech held by the American Crusade. They are extremist religious movement run by Reverend Warnock trying to indoctrinate followers and gain political influence. Mishkin realizes that his vampire mother Dunya Mishkin is one of their leaders, and they send Deborah to infiltrate the group. She's kidnapped and taken to Washington, D.C. with their political campaign. Warnock backs Senator David G. Payson for the presidency, who he plans on turning into a vampire after the election. They capture Bennett while he's trying to rescue Deborah, then have him staked and put on a burning pyre. Mishkin rescues Deborah, and they team up to save Andrew from a fiery death. He rushes the stage and stakes Warnock while the tent burns down, then mesmerizes Payson to erase his memory. Andrew and Deborah flee the scene, while Dmitri stays behind to meet his mother again.

Appearing in "The Accusing Hand!"Edit

Synopsis for "The Accusing Hand!"Edit

Synopsis for "The Highest Court In The Land"Edit

Retrieved from "https://heykidscomics.fandom.com/wiki/House_of_Mystery_Vol_1_315?oldid=1434466"
Community content is available under CC-BY-SA unless otherwise noted.