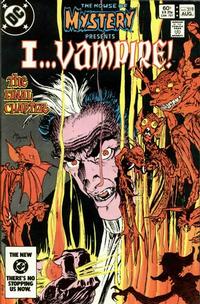 It's over, Mary. I've hated you for so long and for so many reasons -- and at times that hate threatened to consume me! Maybe I'll rediscover how easy it was to love instead of hate now that I have eternity ahead of me... and now that you're gone!

Mary, Queen of Blood holds Andrew Bennett captive as his exposure to the Rashnikov Formula has set him immobile with rigor mortis. Deborah Dancer is captured as well, and Mary bites her in front of Andrew to torment him. In the three days and nights it takes Deborah to turn, Andrew's body rapidly decays and Mary continues to torture him as he becomes a shriveled husk. Eventually she brings the vampirized Deborah back to show him his failure. Deborah reveals that she also took the formula, although as a human it has no such drawbacks for her. The two women have an epic battle, and Deborah finally defeats her nemesis. Mary is dragged out into the sunlight where she explodes into flame and dies. Deborah returns to Andrew's body, and holds him as he finally slips into a peaceful death. Now immortal, she sets fire to the church they're in with vampires inside and walks away from the inferno into the night.

Appearing in "At the Hollywood Deli"Edit

Synopsis for "At the Hollywood Deli"Edit

Retrieved from "https://heykidscomics.fandom.com/wiki/House_of_Mystery_Vol_1_319?oldid=1434470"
Community content is available under CC-BY-SA unless otherwise noted.