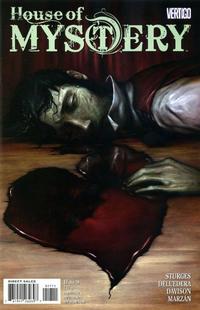 A playwright dates a girl of a non-human species, and while her accountant father does not like him at first, he offers him a job at her insistence and comes to think the boy does have some talent. However, the man remains true to his art and uses the experience only to provide inspiration for another play wherein he savagely mocks the girl's father. He slays the older man during an altercation, and the girl commits suicide, leaving him heartbroken.

Retrieved from "https://heykidscomics.fandom.com/wiki/House_of_Mystery_Vol_2_17?oldid=1434488"
Community content is available under CC-BY-SA unless otherwise noted.