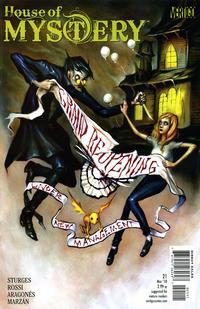 In this western Lovecraftian story Blind Buck rides with his gay partner-in-crime Dandy Dirk into a town visited by a Cthulu-type type critter. Dandy Dirk sacrifices himself with a stick of dynamite to destroy the monster after being consumed. Blind Buck, regaining his spectacles, reflects on how the plainsfolk referred to Dandy Dirk as an abomination but after his encounter he notes that a real abomination has "a lot more tentacles."

Retrieved from "https://heykidscomics.fandom.com/wiki/House_of_Mystery_Vol_2_21?oldid=1434492"
Community content is available under CC-BY-SA unless otherwise noted.