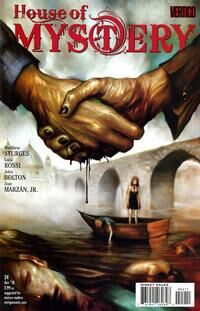 Synopsis for "Romantic Comedy (With Corpses)"Edit

Boy-vampire meets girl-vampire story. The humor comes from their slaughter of the human cattle during their whirlwind courtship in Italy. The undead girl asks him to be her date for her sister's wedding and he agrees at first, but later has second thoughts since his first victim after he was turned was his new bride. He leaves her telling her that maybe people like them are just meant to be alone. She is sad remembering all their cavorting among the drained bodies and goes to her sister's wedding without a date. He shows up at the last minute, apologizes for his earlier lack of commitment, and offers her a severed hand clutching flowers. The two of them go back to cavorting amongst their terrified meal-tickets.

Retrieved from "https://heykidscomics.fandom.com/wiki/House_of_Mystery_Vol_2_24?oldid=1434495"
Community content is available under CC-BY-SA unless otherwise noted.