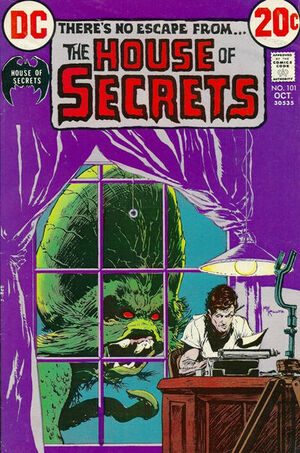 Aliens miscalculate when they make human bodies too perfect for their spies and they fall in love. When the aliens send out a sound signal which kills the humans in a two mile radius of the device the male spy writes down the details before he sacrifices himself for the girl he has fallen in love with, unknown to him, also an alien spy. She arrives at the site and feels a new emotion, besides love, she now feels hate for her alien overseers and reprograms the device to emit a sound deadly to their kind at the transmission's source.

A warlock intends to sacrifice his wife to the Devil in return for a youthful appearance, but she beats him to the punch.

A mobster on the run ducks into an unusual toy store and when he threatens the owners for money he finds that they spiked his food with chemicals which shrink his body so that he can be added as the final touch to a new model torture rack they have been building.

Retrieved from "https://heykidscomics.fandom.com/wiki/House_of_Secrets_Vol_1_101?oldid=1434615"
Community content is available under CC-BY-SA unless otherwise noted.