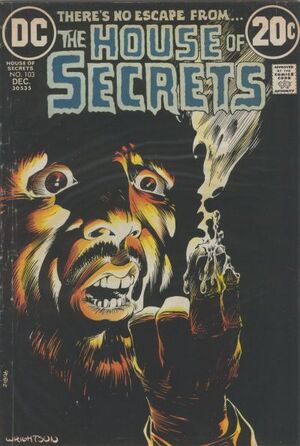 A gambler who gets involved with a scientific project to recreate Earth history in simulation hopes to view the winner of the next atomic war, but the lab is destroyed before he can learn of the victor.

Appearing in "No Bed of Roses"Edit

Synopsis for "No Bed of Roses"Edit

A man frames another man so that he can marry his wife when he is sent to prison. In prison, the convicted man hangs himself and leaves a note that he hopes to reincarnate in order to seek revenge and get his wife back. He reincarnates into a gorilla and escapes the zoo to tear apart the man who married his wife. He goes to his wife's house where he is shot and falls into the woman's flower bed, clutching a picture of her.

Appearing in "The Village on the Edge of Forever"Edit

Synopsis for "The Village on the Edge of Forever"Edit

After the radiation of a future war has destroyed humanity, a sole survivor builds lifelike robots for company. One of the machines, believing itself to be human, seeks out other humans and finds a girl under attack by mutants. He tries to save her and during the fight his arm is damaged and he realizes that he is a robot. He takes the girl back to the man whom he has come to refer to as 'father', but she reveals herself to be a vampire were-creature and kills the old man and tears the 'son' to shreds.

Retrieved from "https://heykidscomics.fandom.com/wiki/House_of_Secrets_Vol_1_103?oldid=1434617"
Community content is available under CC-BY-SA unless otherwise noted.