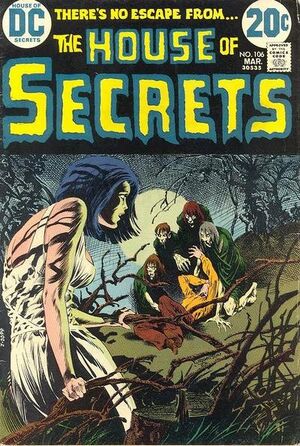 Appearing in "The Curse of Harappa"Edit

Synopsis for "The Curse of Harappa"Edit

Appearing in "The Island of No Return"Edit

Synopsis for "The Island of No Return"Edit

A husband and wife vampire team set up on a small island. They allow one victim to escape so that the story gets out and ensures a steady stream of curious prey for them.

Appearing in "This Will Kill You"Edit

Synopsis for "This Will Kill You"Edit

Two pranksters attempt to scare a half-wit who sleeps in the small town undertaking parlor's back room with a story that the man currently lying in state is a vampire. Later that evening, one of them gets in a coffin after makeup has been applied by his female friend and lets out a groan. Unfortunately for him, his vampire setup has worked a little too well, and the half-wit has armed himself with stake and mallet.

Retrieved from "https://heykidscomics.fandom.com/wiki/House_of_Secrets_Vol_1_106?oldid=1434620"
Community content is available under CC-BY-SA unless otherwise noted.