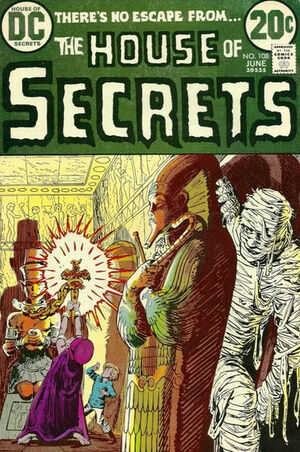 A small town of psychopaths lure out to pasture actors to perform the role of a vampire being pursued which ends in the actor being staked for real.

Appearing in "A New Kid on the Block"Edit

Synopsis for "A New Kid on the Block"Edit

A young Egyptian boy attempts to befriend a local by showing him a fancy dagger that his uncle has warned him carries a curse upon it. The local kid wants to pawn it for cash, and the Egyptian reluctantly agrees, but the pawnshop owner cheats them. Later that night the local boy goes to the shop to get the dagger back so that his new friend won't get in trouble with his uncle and he sees that a mummy has fulfilled the curse upon the owner. While the mummy is distracted he grabs the dagger and notices the mummy is heading towards his friend's house. When he arrives, he sees the mummy carrying his friend and so he stabs the mummy with the dagger in order to save him. Tearfully, the child informs him that the mummy was his mother.

A writer who has been using another man to ghost write for him decides to murder him because he doesn't need him anymore. He pumps several bullets into him, but the man doesn't die, and he admits that he has been dead several years. He is a literal ghost writer. The experience unhinges the writer.

Retrieved from "https://heykidscomics.fandom.com/wiki/House_of_Secrets_Vol_1_108?oldid=1434622"
Community content is available under CC-BY-SA unless otherwise noted.