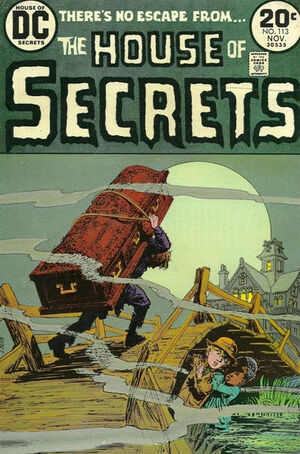 Appearing in "Not So Loud -- I'm Blind!"Edit

Synopsis for "Not So Loud -- I'm Blind!"Edit

A mad scientist creates a slime monster out of a blind beggar who hangs out in the swamp.

Appearing in "Spawns of Satan"Edit

Synopsis for "Spawns of Satan"Edit

A pack of child vampires decides to leave town before they are connected to the local killings. They bury their coffins upon a hill until they feel that it will be safe for them to return to them. They row a boat out upon frigid water intending to occupy island caves, but one drops something overboard and the kids lose their balance and fall into the water where they enter a torpid state. When spring comes around and the water warms up, the vampires stir and rise up during the night. They attempt to make it back to their coffins on the hill, but they discover the townspeople have paved it over with concrete in order to setup a playground devoted to their memory. As their shovels fail to penetrate the concrete, they are burned to ash as the sun rises.

Retrieved from "https://heykidscomics.fandom.com/wiki/House_of_Secrets_Vol_1_113?oldid=1434627"
Community content is available under CC-BY-SA unless otherwise noted.