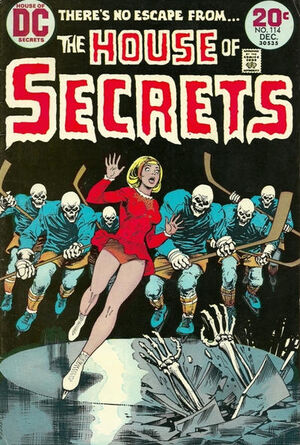 When a crooked hockey player is discovered by his coach, he demands his resignation. He pretends to agree but puts a bomb on the team's airplane killing all aboard. He joins a new team, and the night before a big game he gets a phone call for midnight practice. He gets out on the ice only to be confronted by skeletons. They kill him and prop up his skeleton in front of the goal post.

Appearing in "The Demon and the Rock Star!"Edit

Synopsis for "The Demon and the Rock Star!"Edit

A has-been rock star makes a bargain with a demon to get back on top again, but the price he must pay is three sacrifices indicated by who he gives the demon's jewel to. The first two victims are a former manager and rival rock band, but his third intended victim is a girl he desires but who rejects him. She designs his stage outfits, so when he sends her the jewel, she sews it into his clothes and the demon comes for him.

Retrieved from "https://heykidscomics.fandom.com/wiki/House_of_Secrets_Vol_1_114?oldid=1434628"
Community content is available under CC-BY-SA unless otherwise noted.