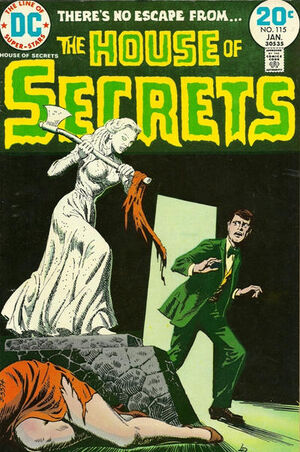 Appearing in "Nobody Hurts My Brother!"Edit

Synopsis for "Nobody Hurts My Brother!"Edit

Twins joined at the head are separated and from then on, they take the wounds that the other experiences. One of them takes advantage of the situation to become a mobster, and it works until his simple brother hears a TV broadcast about a rival mobster attempting to wipe him out. The simple brother confronts the man, and takes a shotgun blast to the chest with no ill effect, but his brother is killed.

The lonely watchman of the wax museum takes home a figure of Lizzie Borden when the owner tells him that he's going to melt it down due to lack of public interest. The watchman meets a single female neighbor and he becomes convinced that the statue is jealous. He proposes to the woman but she thinks the statue is creepy and demands he get rid of it. When he complies, the statue tilts over and embeds its ax in his back. The statue regains its place in the museum after news of the bizarre death becomes public knowledge.

Appearing in "Every Man My Killer!"Edit

Synopsis for "Every Man My Killer!"Edit

A man who can't remember his name is being hunted and does not understand what he has done to make everyone he encounters want to kill him. When he is destroyed at the end of the story it is revealed that he is a robot who has gone rogue and then lost its memory.

Retrieved from "https://heykidscomics.fandom.com/wiki/House_of_Secrets_Vol_1_115?oldid=1434629"
Community content is available under CC-BY-SA unless otherwise noted.