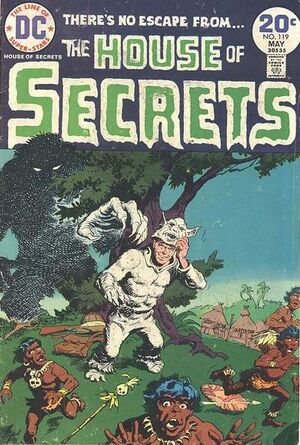 Appearing in "A Carnival of Dwarfs"Edit

Synopsis for "A Carnival of Dwarfs"Edit

Two carnival owners come across an old man and group of dwarfs so they threaten to harm the old man unless the dwarfs perform for the show. What they don't know is that the old man and dwarfs are a pack of vampires.

A professor dresses in a Bigfoot costume to get some film of the natives interacting with their god, but his plan goes awry when a real Bigfoot becomes paternalistic and carries him away to his cave.

Retrieved from "https://heykidscomics.fandom.com/wiki/House_of_Secrets_Vol_1_119?oldid=1434633"
Community content is available under CC-BY-SA unless otherwise noted.